Trump calls Afghan forces ‘heroic partners’ of the US military 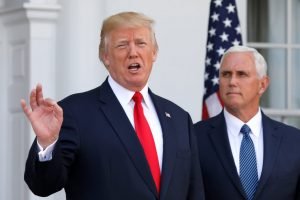 The US President Donald Trump called the Afghan national defense and security forces the ‘heroic partners’ of the US military as he insisted on relentless fight against terrorism in his State of the Union address.

President Trump said he has signed an order directing the Defense Secretary to reexamine the military detention policy and to keep open the detention facilities in Guantanamo Bay.

“I am asking Congress to ensure that, in the fight against ISIS and al Qaeda, we continue to have all necessary power to detain terrorists, wherever we chase them down, wherever we find them. And in many cases, for them, it will now be Guantanamo Bay,” he said.

He also added “At the same time, as of a few months ago, our warriors in Afghanistan have new rules of engagement.”

“Along with their heroic Afghan partners, our military is no longer undermined by artificial timelines, and we no longer tell our enemies our plans,” President Trump added.

This comes as President Trump on Monday said the US government is not ready and does not want to talk with the Taliban after a series of deadly attacks left scores of people dead.

Condemning the recent Taliban attacks in Kabul and other parts of Afghanistan, President Trump said “When we see what they’re doing and the atrocities that they’re committing, and killing their own people, and those people are women and children — many, many women and children that are totally innocent — it is horrible.”