Tribal elder among 5 killed or wounded in Nangarhar explosion 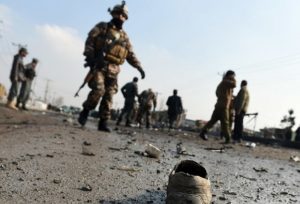 At least five people including a tribal elder were killed or wounded in an explosion in eastern Nangarhar province of Afghanistan.

The incident took place earlier today in the vicinity of Pekha district, leaving a local tribal elder dead and four others wounded.

Provincial governor’s spokesman Ataullah Khogyani confirmed that explosives planted in the vehicle of Malik Abdul Rauf went off around 7:30 am local time, leaving him dead and two others accompanying him wounded.

Khogyani further added that two other civilians were also wounded in the explosion.

No group including the Taliban insurgents or militants affiliated with the Islamic State of Iraq and Syria has so far claimed responsibility behind the incident.

The Taliban insurgents frequently use IEDs and magnetic bombs as the weapon of their choice to target the security forces and government officials but in majority of such incidents the ordinary civilians are targeted.

The United Nations Assistance Mission in Afghanistan (UANAMA) released its latest civilian casualties report late in April, covering a period of three months since the start of 2017.