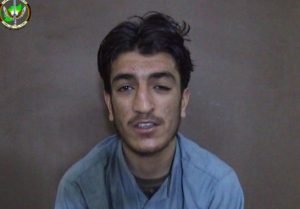 A suicide bomber was arrested before he manage to carry out an attack in Orgun district of southeastern Paktika province of Afghanistan.

The Afghan Intelligence, National Directorate of Security (NDS), said the suicide bomber was arrested during a special operation from the vicinity of Orgun district.

A statement by NDS said the detained bomber has been identified as Abdul Wali and was looking to carr out an attack using the explosives vest in Orgun city.

NDS further added that the detained bomber has confessed he spent around a month in Kohat of Pakitan and was then sent to Waziristan for further training.

Militants belonging to the Taliban insurgents and Haqqani terrorist network are actively operating in southeastern provinces, including the Paktika province.

The Haqqani network is believed to be operating from its safe havens located in Pakistan as the Afghan officials have long been criticizing Pakistan for allowing the network to use the Pakistani soil to plan and coordinate attacks in Afghanistan.