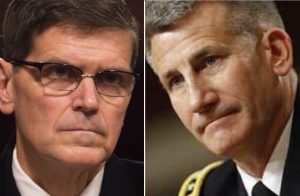 The Commander of the NATO-led Resolute Support and US Forces in Afghanistan General John Nicholson and Commander of the US Central Command General Joseph Votel reaffirmed their stance regarding the support to an Afghan-led peace process and relentless fight to counter-terrorism.

The two top US and NATO Commanders reaffirmed their stance while speaking to media outlets in Kabul late on Monday.

The two Senior Generals said they support the Afghan-led peace process as they emphasized that Pakistan should also play its role in Afghan reconciliation process.

Gen. Nicholson said the Afghan government has shared its offer regarding peace process and the Taliban group should immediately participate in peace talks, insisting that the existing issues can be resolved through negotiations.

In regards to the ceasefire with the Taliban group, Gen. Nicholson said the approach could also prove risky as certain circles may attempt to misuse the ceasefire declaration.

In the meantime, Gen. Nicholson warned that the militants would be annihilated if they rejected to participate in peace process.

Gen. Nicholson said the United Arab Emirates would also send forces to Afghanistan to assist with the ongoing counter-terrorism efforts, particularly in the fight against ISIS group.

On the other hand, Gen. Votel said Pakistan should play its role in Afghan reconciliation process and must take necessary steps to help bring the Taliban group to negotiations table.

He said the United States remain committed to support the Afghan National Defense and Security Forces and will continue to support them during the counter-terrorism operations.