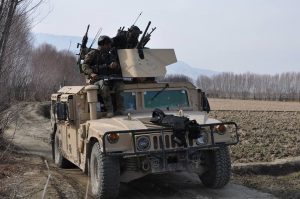 Several top leaders of the Taliban group were killed during the ongoing clearance operations in Imam Sahib district of Kunduz province, the commander of the 209th Shaheen Corps of the Afghan National Army Gen. Amanullah Mubin said.

Speaking during a press conference, Gen. Mubin said the operations for the elimination of the militants from Imam Sahib district kicked off a week ago and since then at least 77 insurgents have been killed.

He said at least 110 Taliban insurgents were also wounded during the operations and at least 19 hideouts of the group were destroyed.

According to Gen. Mubin, at least eleven vehicles belonging to the Taliban insurgents were also destroyed during the operations while a clinic was also damaged.

The operations in Imam Sahib district was launched soon after the Taliban insurgents launched a coordinated attack with an aim to capture its control.