Top Taliban leader in charge of recruitment arrested in Kunduz 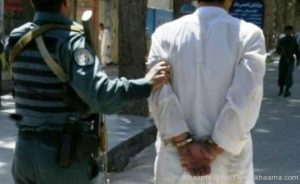 A top Taliban leader in charge of recruiting for the group in northern Kunduz province was arrested during an operation of the Afghan police forces.

The Ministry of Interior (MoI) said the detained Taliban leader has been identified as Abdullah and was held from the vicinity of Khanabad district.

Another senior Taliban leader identified as Abdul Wakil was also arrested during the same operation, MoI said, adding that an automatic rifle was confiscated from the detained militants.

Kunduz is among the relatively volatile provinces in northern Afghanistan where the Taliban insurgents are actively operating in a number of its remote districts.

A group of Taliban insurgents suffered casualties in a premature bomb explosion in this province earlier this week.

According to the local security officials, the incident took place late on Saturday night in Imam Sahib district.

A spokesman for the 20th Pamir Division, Gen. Ghulam Hazrat Karimi, said one militant was killed as he was planting an Improvised Explosive Device (IED) in Qerghiz area.