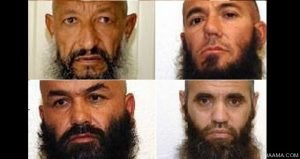 A top intelligence official of the Taliban militants group in Afghanistan was among the 4 inmates released from Guantanamo.

The top Taliban leader, Mohammad Zahir, was also a leading weapons supplier who was arrested suspicion of possessing weapons including Stiner missiles and uranium.

“Detainee was arrested on suspicion of possessing weapons including Stinger missiles and uranium, which detainee’s recovered documents indicate was intended for use in a nuclear device,” according to Zahir’s threat assessment obtained form his file by Telegraph.

Zahir was released from the detention facility along with three other inmates, including Shawali Khan, Khi Ali Gul, Abdul Ghani.

According to US defense officials, the interagency Guantanamo Review Task Force which considers security issues and other factors in intensive reviews of possible releases, had approved for the transfer of detainees to Afghanistan.

According to the US officials, the release of the four inmates from Guantanamo was the first such transfer of its kind to the war-torn country since 2009.

The release of the Afghan prisoners comes as the US President Barack Obama tries to reduce the number of those held at Guantanamo and works toward his goal of closing the detention center.

Obama promised to shut the internationally condemned prison when he took office nearly six years ago.