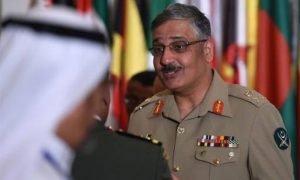 A top Pakistani army general has said maintaining peace and stability in South Asia will be impossible as long as the issues of Afghanistan and Kashmir are not resolved.

The Chairman of Joint Chiefs of Staff of Pakistan Gen. Zubair Mahmood Hayat made the latest remarks during a gathering on Tuesday.

He said Pakistan supports a peace Afghanistan since the country is an important region between South and Central Asia.

Gen. Hayat claimed that South Asia is being destabilized through non-state elements whole and instability in Afghanistan was harmful for the region.

According to Gen. Hayat, Pakistan wants Kashmir and Afghan issues to be resolved in order to help maintain peace and stability in the region.

He also claimed that Pakistan is paying a heavy price due to instability in Afghanistan which according to him has links with the weak governance and fragile peace process.

The remarks by Gen. Hayat came as the Afghan officials believe the ongoing violence in Afghanistan resulting to regional instability has links with the terror outfits having safe havens in Pakistan.

According to the Afghan officials, the Haqqani terrorist network and Taliban safe havens are located in the key cities of Pakistan and only elimination of such sanctuaries could help bring peace and stability in Afghanistan and the region.