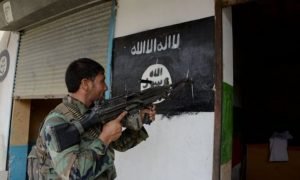 A top ISIS leader who was in charge of recruiting fighters for the terror group was arrested during an operation in capital Kabul.

The Afghan Intelligence, National Directorate of Security (NDS), said the senior ISIS leader was arrested by the Special Forces of the intelligence directorate.

A statement by NDS said the detained individual has been identified as Abdul Maheen and was arrested from the 11th Police District of the city.

The statement further added that the deputy of Maheen identified s Saifullah was also arrested during the same operation.

According to NDS, the detained individuals have confessed to their crime and involvement in recruitment of militants for the terror group in Kabul.

The detained individuals are currently in custody of the NDS for further investigation, NDS said, adding that the duo were held after based on a tip off and while they were attempting to transfer the families of ISIS from Nangarhar to Jawzjan province.

The ISIS terrorist group loyalists have not commented regarding the arrest of their senior leader in Kabul so far.