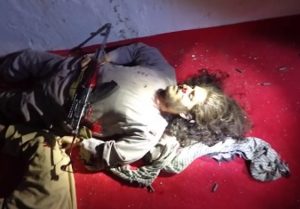 A top leader of the notorious Haqqani terrorist network was killed along with dozens of other militants in an operation in central Maidan Wardak province of Afghanistan.

According to the local officials, the operation was conducted in the vicinity of Nerkh district of Wardak by the Afghan Special Forces.

He said several commanders of the Taliban group were also among those killed in the operation.

However, another official said more than 30 insurgents including a top leader of the Haqqani terrorist network Qari Qudrullah were killed.

Afghanistan won its first game of the T20 World Cup in Sharja and beat Scotland by 130 runs. Afghanistan...

Afghanistan’s Federation of Football in a statement said that the national U23-Omaid- football...

European Union has decided to open an office for its diplomatic mission in the Afghan capital in...