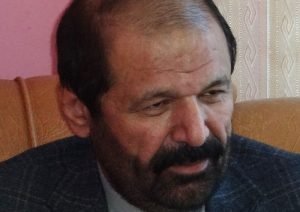 A top former Afghan jihadi leader Syed Hussain Anwari has reportedly died due to an illness he was suffering for a long period of time.

Anwari was the leader of Hezb-e-Harakat, Islamic Movement Party of Afghanistan, and was under treatment in India.

Sources have said Mr. Anwari was suffering from cancer and died as he was he undergoing treatment in India.

Born in 1956 in northern Parwan province of Afghanistan. Mr. Anwari has served in numerous governmental posts, including the provincial governor of Kabul and western Herat province.

He also played key role in the government following the collapse of the communist regime in 1992.

Anwari joined the Northern Alliance after the Taliban group gained power in 1996 and was appointed as the Minister of Agriculture and Livestock following the fall of the Taliban regime and the formation of the transitional government led by former President Hamid Karzai.

He has also run for the 2014 presidential election after resigning as the lawmaker in the Lower House of the Parliament adn was competing for the elections as deputy to presidential runner Abdul Rahim Wardak.