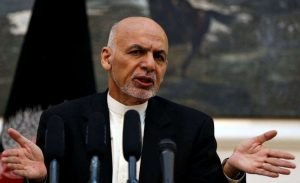 Speaking during the Tashkent Conference on Afghanistan, President Ghani said the terrorist groups do not recognize any geography.

President Ghani further added that the schools and other infrastructures have been damaged and major threats remain but the Afghans have a strong as they go through a historic moment.

In regards to the threats posed by the Islamic State terrorist group in Afghanistan, President Ghani said the group has almost two thousand fighters in Afghanistan.

However, he said the Afghan security forces are bravely fighting the terrorist groups and more than one thousand IS militants have been killed during the operations so far.

He suggested close regional cooperation and joint efforts to eliminate the threats posed by the terror groups and said a strong political will must exist to use the opportunities for the benefit of the region.

President Ghani also added that the fight against terrorism should led to victory in a bid to help make the political system successful.