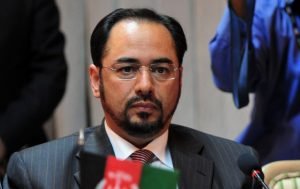 The Afghan Foreign Affairs Minister Salahuddin Rabbani has said that the terrorist groups fighting in Afghanistan are looking to expand their insurgency activities both regionally and globally.

Speaking to a gathering attended by high level members of Shanghai Cooperation Organization (SCO) in in Moscow, Rabbani said Afghanistan is not the final destination of the terrorist groups.

According to Rabbani each of the terrorist groups have their specific motives and the Afghan security forces are suffering casualties while fighting the groups on daily basis.

He said terrorism is one of the major challenges for the Afghan government on domestic, regional and international levels, and insisted that terrorism does not recognize borders and will continue to threaten the regional and global security.

Rabbani also added that terrorism and violence in Afghanistan has regional links and Afghanistan has been suffering from the phenomenon of terrorism during the past two decades and the Afghan forces continue to defend from the sovereignty of Afghanistan and assist in maintaining peace and stability in the region by fighting the terror groups.

He also called on the regional nations to assist Afghan security forces in fight against terrorism.