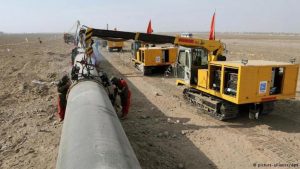 The 21st summit of Turkmenistan-Afghanistan- Pakistan-India (TAPI) gas pipeline project is scheduled to be held in Kabul tomorrow.

He says that representatives from the mines and petroleum ministries of Pakistan, India and Turkmenistan will be discussing the implementation of TAPI project with their Afghan counterparts in Kabul on Thursday.

Turkmenistan-Afghanistan-Pakistan-India (TAPI) gas pipeline project delivers Turkmenistan’s gas to Afghanistan and then to Pakistan and India.

It is economically a significant project for Afghanistan.

Rafiullah Sediqi, spokesman for the Ministry of Mines and Petroleum of Afghanistan says that this 30 years long project will find job opportunities to Afghans and also Afghanistan will get millions of dollars as the transit from this project.

The project is developed by the Asian Development Bank.