Taliban’s military commission chief for Badakhshan killed with his comrades 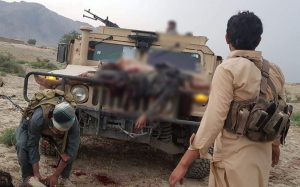 The military commission chief of the Taliban group for northeastern Badakhshan province has been killed with his comrades during the military operations.

The 209th Shaheen Corps of the Afghan Military in the North in a statement said Mawlavi Hamidullah was killed with his six comrades in Orgu district.

The statement further added that three militants were also wounded during the same operations which are being conducted to suppress the militants in this province.

According to 209th Shaheen Corps, the militants were killed or wounded as part of the ongoing Khanjar-14 operations.

The anti-government armed militants including the Taliban group have not commented regarding the report so far.