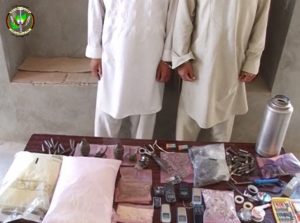 A bomb making factory of the Taliban group was busted during an operation in northern Balkh province of Afghanistan, the Afghan intelligence said Sunday.

The National Directorate of Security (NDS) said the factory was discovered in Robat village located in Chemtal district.

According to a statement by NDS, two experts working in the factory to manufacture Improvised Explosive Device (IED) were also detained during the operation.

The statement further added that the two suspects have been identified as Mehrabuddin son of Noor Mohammad and Mohammad Ewaz Akbari son of Abdul Salam.

According to NDS, the Taliban militants were looking to use the weapons and explosives to plan and coordinate attacks during the Eid days in Balkh province.

NDS said the Taliban militants were looking to target the mosques during the Eid days as hundreds of people would gather for Eid prayers.