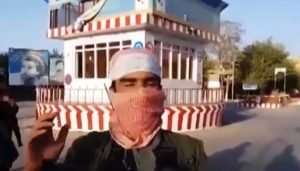 The Taliban militants group has released numerous videos earlier this evening which purportedly shows the capture of the strategic Kunduz city in north of Afghanistan.

The authenticity of the videos which can not be independently verified shows the Taliban group moving towards the main square which was captured by the group last year.

The group has also released several other videos which purportedly shows the militants of Taliban moving in parts of the city as they hang around the public places in the city.

However the officials in the Ministry of Defense have rejected the fall of the city to Taliban as baseless.

The Ministry of Defense (MoD) said the Taliban militants launched an attack from the west part of the 3rd police district of the earlier today but the attack was repulsed.

MoD further added that additional forces have been deployed and more troops are on the way to repulse the Taliban attack.

Earlier, reports suggested that the militants of the group have started taking positions in the residential areas as they attempt to avoid airstrikes and ground operations by the Afghan forces.

The Taliban group launched a coordinated attack on Kunduz city earlier today, almost a year after the group captured the control of the city and coicides with a deadly airstrike carried out on MSF hospital in the city.