Taliban video shows former US base captured in Farah province 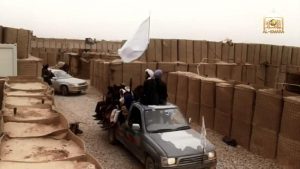 The Taliban militants group in Afghanistan has released a video which purportedly shows the group’s militants have captured a military base in western Farah province.

The military base was reportedly captured in Bakwa district and was previously in control of the NATO-led coalition security forces.

The 16-minute video was recently released by the group’s media wing – Al-Emara Jihadi studio which also shows one of the group’s leaders making a lengthy speech in Pashto and the white Taliban flag hoisted inside the base.

According to reports the base was previously operated by the US forces to tackle the local trade in heroin in Farah province.

The group also released a statement along with the video, stating that the base was captured by the Taliban after a prolonged siege.

The statement further added “It is hoped that this release brings joy of our viewers”, with  overexcited Taliban supporters on social media insisting that the radical group of jihadis will retake Kabul soon.”

The local government officials have not commented regarding the propaganda video so far. However, the provincial council chief Farid Bakhtawar had earlier said that the Taliban group was posing threat to the stability of Farah province.