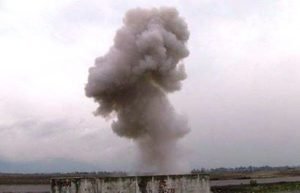 A Taliban vehicle hit an Improvised Explosive Device (IED) planted by the fighters of the own group in eastern Nangarhar province of Afghanistan, leaving at least eleven militants of the group dead or wounded.

The 201st Silab Corps of the Afghan National Army in the East said the incident took in the vicinity of Sherzad district.

The source further added that several Taliban insurgents were travelling in a pickup vehicle when it run over an IED already planted by the insurgents, leaving four of them dead and five others wounded.

In the meantime, the provincial government media office in a statement said at least three Taliban insurgents were killed during a clash with the security force in Khogyani district.

According to the officials, all the incidents took place within the past 24 hours.

The United Nations Assistance Mission in Afghanistan (UANAMA) released its latest civilian casualties report in April, covering a period of three months since the start of 2017.