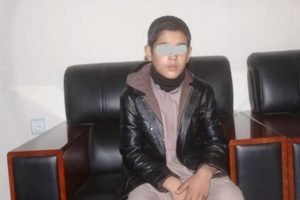 Amid growing concerns regarding the use of children as child soldiers and suicide attacks by the anti-government armed militant groups, a shocking report has emerged regarding an 11-year-old child who was trained by the Taliban militants since he was only 5 for a suicide attack mission.

The child, Rohullah, was abducted by the Taliban militants when he was only 5-year-old and since then has been trained on how to carry out suicide attack.

According to the local government officials in northern Kunduz province, Rohullah was abducted from Khanabad port and was kept in Imam Sahib district where he was being brain washed and trained regarding the suicide attacks.

Provincial police chief Mohammad Qasim Jangal Bagh said Rohullah was arrested by the security forces from an area close to a security check post in the 1st police district of Kunduz city.

It is yet not clear if the child was due to carry out a suicide attack with the Taliban militants group yet to comment regarding the report.

This is not the first time the anti-government armed militant groups have recruited children including young girls as child soldiers who are frequently used for suicide attack missions.

The children were originally residents of the southern Kandahar province and were transferred to their families after they were captured by the security forces.