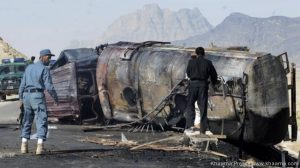 According to local authorities in western Farah province of Afghanistan, Taliban militants torched at least 40 oil tankers which was carrying fuel supply for the NATO troops in this province.

Provincial governor spokesman, Abdul Rahman Zhwandai confirming the report said the incident took place after Taliban militants attacked a convoy of the NATO fuel supply which was parked in a parking area.

He said at least 10 others were also injured following the attack. Taliban militants group claimed responsibility behind the incident.