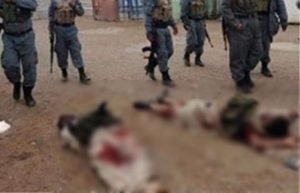 The Taliban militants suffered heavy casualties during an operation in the restive Uruzgan province in southern Afghanistan.

The Ministry of Defense (MoD) said the operation was conducted in Charchino district by the Special Forces of the Afghan National Army.

According to MoD, the operations were conducted to suppress the insurgency activities of the Taliban militants which led to the elimination fo 47 militants while 41 others were wounded.

No further details were given regarding the possible casualties of the Afghan armed forces.

The anti-government armed militant groups have not commented regarding the report so far which comes amid rampant insurgency led by the Taliban group across the country.

The Taliban insurgents are actively operating in a number of the districts of Uruzgan province and often carry out insurgency activities.

The group carried out one of its deadly attacks on the Afghan armed forces in Dehrawood district nearly two weeks ago.

At least 10 soldiers of the Afghan National Army lost their lives and around 12 others are missing following the attack on a check post.