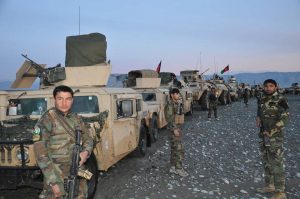 The Taliban insurgent suffered casualties during the ongoing Pamir-17 operations in northern Kunduz province of Afghanistan as the military officials are saying that hundreds of rounds of Ak-47 ammunition were also confiscated along with an Improvised Explosive Device.

The 209th Shaheen Corps officials said at least five Taliban insurgents were killed and five others were wounded during the operations in the past 24 hours.

The officials further added that the Afghan armed forces also confiscated an Improvised Explosive Device and 300 rounds of Ak-47 ammunition during the operations.

The officials also added that two Taliban insurgents were critically wounded during a clash with the security forces in Qaflatoon village in Sayad district of Sar-e-Pul province.

The Pamir-17 operations are underway in the restive parts of the country in the North to suppress the insurgency activities of the militants who are attempting to expand foothold in the key provinces.

In the meantime, the hundreds of the Afghan Special Forces are expected to join the Afghan armed forces in the fight against the militant groups in the restive parts in the North as efforts are underway to launch more offensive operations with the start of the fighting season in coming months.