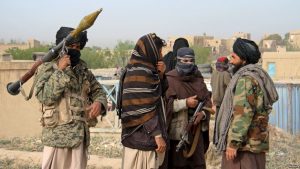 The shadow provincial governor of the Taliban group was killed in a special military operation conducted by the Afghan security forces in northern Jawzjan province.

The Ministry of Interior (MoI) said the operation was conducted in Qazan Mazo village in Manjigak district.

A statement by MoI said the Taliban shadow judge was identified as Mullah Abdul Rahman who was killed together with his 5 companions.

The statement further added that Mullah Rahman was involved in desert trial of innocent civilians besides having active role in majority of terrorists attacks.

According to the Ministry of Interior, the Afghan forces also confiscated a PK machine gun, 1 rocket launcher, 1 Ak-47 assault rifle and 1 motorcycle belonging to the militants.

The Afghan security forces and the local residents did not suffer any casualties during the operation, the ministry added.

Jawzjan is among the relatively volatile provinces in northern Afghanistan where anti-government armed militant groups are actively operating in a number of its districts and frequently carry out insurgency activities.