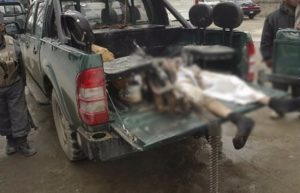 The Taliban shadow governor for the central Ghor province was killed in airstrikes conducted in northern Faryab province of Afghanistan.

The Ministry of Interior (MoI) said Tuesday that the airstrikes were carried out late on Monday evening in Pashtoon kot district of Faryab.

According to a statement by MoI “Yesterday evening, during an airstrike which was took place in Sakhi Dad and Tilan villages of Pashton Kot District of Faryab province, 50 armed Taliban were killed including Mullah Ahmad Shah Ghori Taliban’s so-called governor for Ghor province.”

The statement further added “Also, one vehicle, one machine gun and some amount of light and heavy rounds of ammunition destroyed as well.”

Faryab is among the relatively volatile provinces in northern Afghanistan where the Taliban insurgents and militants belonging to the other insurgents are active in a number of its remote districts.

The killing of the Taliban shadow governor in Pashtoon Kot comes as the group has intensified attacks in northern provinces during the recent months, specifically in Kunduz province.

The group captured the control of Khanabad district and Qala-e-Zal following days of clashes but the Afghan forces managed to push the militants out of the district center.

28 Million Afghans are in Dire Need of Humanitarian Aid: UNICEF

Millions of Dollars Are Smuggled to Afghanistan: General Secretary ECAP

28 Million Afghans are in Dire Need of Humanitarian Aid: UNICEF

The United Nations Children’s Fund (UNICEF) has announced that...

The death toll from the devastating earthquake in Turkey...