Taliban says not a threat to America, decry coalition role in Helmand fight 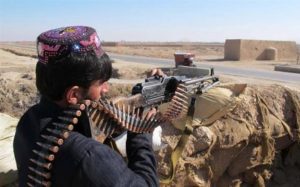 In a series of back-to-back setbacks in their offensive in southern Helmand province of Afghanistan, the Taliban group on Saturday issued a statement decrying the coalition forces role in the ongoing fight in Helmand.

The statement by the Taliban group followed after the Afghan national security forces operations gained momentum in repulsing the Taliban offensive with the air support of the coalition forces.

The Taliban group warned that the interference of the coalition forces in Helmand fight could derail the peace, a statement contrary to the Taliban offensive which has been launched amid ongoing efforts to end ongoing violence which has been ongoing during the past 14 years.

Claiming victory in the ongoing war in Afghanistan, the Taliban group said they “are not a threat to anyone including America and have no intention of enmity and fighting with anyone rather our goal is to defend our soil.”

The statement by the Taliban group further added “No other system is acceptable to the Afghans except for an Islamic system. In short the end of occupation and establishment of Islamic system is peace as well as the solution in itself. Similarly it embodies security, stability and aspirations of the Afghan nation.”

Taliban-led insurgency being rampant amid efforts to revive peace talks has not been unprecedented with the Afghan officials saying the move by the Taliban group ahead of potential talks is to gain privilege for the negotiations.

The officials also believe that the group has stepped up efforts to take control of key areas of Helmand province in a bid to shift the group’s council from Quetta city of Pakistan.

Meanwhile, the Taliban militants suffered heavy casualties in the latest wave of counter attacks launched by the Afghan security forces in Helmand province.

The Ministry of Defense (MoD) said at least 35 militants were killed after the Afghan forces repulsed an offensive in Greshk district on Friday night with the support of the coalition forces who were providing air support from the air.