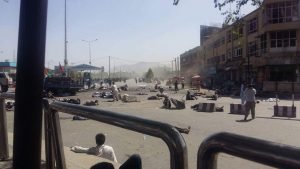 The Taliban militants group has rejected hand in a deadly attack targeting the demonstration in Kabul city which left nearly 200 people dead or wounded.

The Taliban group spokesman Zabiullah Mujahid said the group has no link with the explosions in Kabul city, calling it a grim move to create divisions among the people.

Mujahid further added that the group condemns any move that lead to creation of divisions, including ethnic and religious divisions among the people of Afghanistan.

Without elaborating further Mujahid said the attack was carried out by the enemies.

The Ministry of Public Health officials have said at least 31 people have lost their lives and 160 others sustained injuries in the incident.

President Mohammad Ashraf Ghani has said he is deeply saddened by a deadly attack targeting the rally participants in Kabul city this afternoon.

The Office of the President in a statement said “The President of Afghanistan has said organizing peaceful rallies is the right of every citizen of the country and the government uses all efforts to maintain security of the protesters but the opportunist terrorists infiltrated among the protesters and carried out explosions which led to the martyrdom of several citizens of the country as well as security personnel.”

Hundreds of thousands of people gathered in West of Kabul this morning and started marching towards Deh Mazang area where the incident took place.

The protesters were demanding the government to implement the massive 500kV TUTAP projecct through its original route which was Bamyan province.