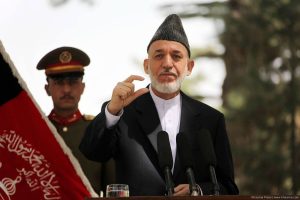 Taliban militants group in Afghanistan rejected president Hamid Karzai’s remarks regarding the lack of authority of the Taliban group in ongoing violence in the country.

Taliban claimed responsibility behind the explosions and violence in the country, and said that Karzai’s remarks are due to his ignorance from the ongoing situation in the country.

President Hamid Karzai on Friday met with the members of the Afghan Ulema (Clerics) Council, and claimed that Taliban leaders have contacted the government of Afghanistan and have said that they are unaware of violence in Afghanistan, which are claimed under the Taliban group’s name.

Karzai quoted in a statement released by presidential palace media office said, “Taliban leaders recently have said that they are completely without authority, and we are unaware of the killings and explosions in Afghanistan, which are claimed under the Taliban group’s name.”

Karzai said, “Our question to Taliban is that, why you (Taliban group) is not raising your voice, if this is the case? Being without authority means that you (Taliban) have given your authorities to others.”

President Hamid Karzai urged the Taliban group to raise their voice and free themselves being a slave, and without any authority.

However, Taliban group spokesman Zabiullah Mujahid in a statement said that Taliban did not have any secret contact with the Afghan government, and the remarks by Karzai is due to his ignorance and lack of logic.

Mr. Mujahid further added that Afghan president has called himself as an unauthorized person, and even a kid knows that such remakrs are only a propaganda.

He said, “Taliban militants are instantly claiming responsibility behind any attack which are carried out by them, and they inform the media agencies regarding the details of the attacks.”