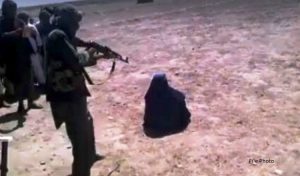 The Taliban militants have publicly executed a 19-year-old girl in northern Sar-e-Pul province on charges of abandoning her family due to a domestic issue.

According to local officials, the girl, identified as Azada, was first tried in a desert court and was then shot dead by her brother and Taliban militants.

He said the girl had taken shelter in a safe house after she left her home around two months ago but was brought back to home by her brother.

Amani further added that the girl was taken out of the shelter after her brother promised to ensure her safety.

The latest involving public execution of a girl by the Taliban militants and her family member comes amid growing violence against the women across the country.

Earlier a 22-year-old woman was shot dead by her relatives on charges of having relations with an stranger over the telephone.

The woman was identified as Gul Jan and was allegedly been killed by the family of her husband in Pashtunkot district.

The report further added that figure was reported 2403 cases during the six months in 1393 which shows 7.32 percent increase in 1394, the last solar year.