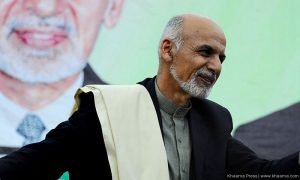 The Taliban militants group in Afghanistan predicts that Dr. Ashraf Ghani Ahmadzai will be declared winner in presidential election.

Taliban group following a statement claimed that Washington has made major investments on Dr. Ashraf Ghani Ahmadzai and organized strong campaigns for him, besides offering him enormous amounts of money to attract the well known people to his camp.

The statement by Taliban further added that Washington could not continue use President Karzai as it’s moderator for coming years, being the importer of democracy to other nations and therefore chose Ashraf Ghani to implement its strategies in Afghanistan.

Taliban also claimed that Washington was looking to appoint Zalmai Khalilzad as its moderator in Afghanistan; however, the decisio was revised considering the sensitivies of the Afghan people.

The remarks by Taliban group comes as the electoral bodies are busy with the vote audit for the ruoff election which will declare the final winner of the presidential election.

In the meantime, Taliban claimed that Dr. Ghani can better implement the strategies of Washington in Afghanistan, as he has completed his higher education in United States and was a resident of the same country for a considerable period of time.