Taliban office opened in Qatar in absence of Afghan officials 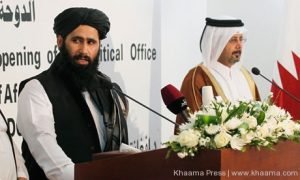 The Taliban political office was opened in Qatar on Tuesday in the absence of Afghan government representatives.

Taliban group representatives during the opening of the political office in Doha said, “As it clear for everyone that the Islamic Emirate of Afghanistan will consider all legitimate ways to end the occupation of Afghanistan, and will continue to its efforts for bring an independent and Islamic system.”

The Islamic Emirate of Afghanistan is keen on having good relations with the neighboring countries and the world considering mutual respect, and urges for global peace, stability and justice.

Representatives of the Taliban group also insisted that freedom of the country from the occupying forces is a religious and national obligation, and will continue to its efforts through all legitimate ways.

They also added that the Islamic Emirate of Afghanistan decided to open its political office in Qatar with the following motives and targets:

1. Communication and understanding to improve its relations with the international community.

2. To support political solutions in a bid to free Afghanistan from the occupation, bring an independent and Islamic system and improve security and stability which is a desire for the whole nation.

3. To meet and hold talks with the Afghans if and when needed.

4. communication with the United Nations, regional, international and non-governmental organizations.

The Taliban group representatives also said that the Islamic Emirate of Afghanistan is grateful to emir of Qatar to assist with the establishment of the Taliban political office.