Taliban not to win the war, warns Abdullah Abdullah 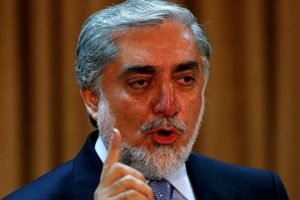 The Chief Executive of the Government of National Unity Abdullah Abdullah once again called on Taliban group to renounce violence and join peace process as he insists that the group will not win the war on the battlefield.

Abdullah made the remarks during a gathering to mark the 23rd death anniversary of a prominent political leader Abdul Ali Mazari who was assassinated by the Taliban group.

He reiterated his earlier remarks as well as the government’s offer for peace and said the Taliban group should join peace process, insisting that the insurgent group will never achieve victory militarily.

Earlier, Abdullah slammed the Taliban group for their silence regarding the government’s offer to the group for reconciliation.

In his speech during the Council of Ministers meeting earlier this week, Abdullah said all those who groups which are rejecting the government’s offer for reconciliation and commit atrocities will have their names listed in the black history of the country.

The Afghan officials say the government is prepared to recognize Taliban as a political group if the group lay down arms, cut ties with the terror groups and networks, and renounce violence.

However, the Taliban group has so far refrained from participation in direct peace talks with the Afghan government and insists on direct talks with the US.

In the meantime, President Ghani is optimistic that the new strategy of the United States for South Asia has paved the way for reconciliation process.

In his meeting with the US defense secretary James Mattis yesterday, President Ghani insisted on the need for reconciliation and government’s stance for peace talks but he reiterated that the Afghan forces will continue to suppress the insurgent groups that pose threats to the security of the country.