Taliban militants suffer heavy casualties in US airstrikes in Helmand 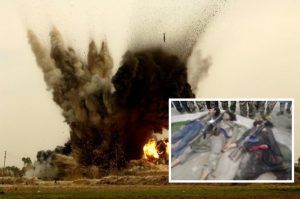 The Taliban militants have suffered heavy casualties during the airstrikes conducted by the US forces in southern Helmand province of Afghanistan.

The provincial government media office in a statement said the US forces carried out airstrikes targeting Taliban militants in Nad Ali district.

The statement further added that the airstrike was carried out in the vicinity of Chah Anjir area of the district, leaving at least 13 militants dead.

According to another report, the US forces carried out an airstrike targeting the militants in Tarikh Nawar area as they were attempting to carry out attacks on Afghan security posts, the provincial government said.

At least 14 militants were killed and 7 others were wounded during the same airstrikes, the provincial government added in its statement.

Helmand is among the relatively volatile provinces in South of Afghanistan where the anti-government armed militants are actively operating in some of its districts and often carry out terrorist related activities.

This comes as at least 19 militants were killed during the similar airstrikes conducted in Nahr Siraj district last week.