Taliban militants flee from Kohistanat with arrival of Gen. Dostum 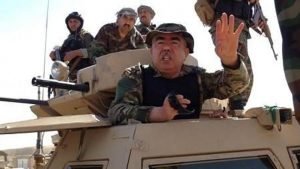 The Taliban militants have abandoned the restive Kohistanat district by fleeing the area after the First Vice President Gen. Abdul Rashid Dostum arrived in Sar-e-Pul province.

According to the local government officials, the Afghan national security forces managed to retake the control of the district after the Taliban militants fled the area.

Gen. Dostum called on anti-government armed militants in the restive northern Sar-e-Pul province to surrender or face death upon his arrival in this province.

Gen. Dostum promised that Balkhab district which is now controlled by Taliban militants will soon fall to the control of the Afghan national security forces.

He said he will move towards northern Kunduz province once Sar-e-Pul province has been cleared from the militants, provided that the president and the national security council agrees to proceed.

He survived at least two assassination plots by the anti-government armed militant groups while he was leading counter-terrorism operations in Faryab.

The convoy of the First Vice President Gen. Abdul Rashid Dostum was ambushed by the Taliban in militants in Qaisar district of northern Faryab province last week.

Another plot to assassinate Gen. Dostum was thwarted by the security forces and special security guards of the Vice President three days after the failed attack.

At least three suicide bombers were arrested earlier on Monday tonight from the vicinity of Gen. Dostum’s residence in Qaisar district.