Taliban militants blown up by own explosives in Laghman province 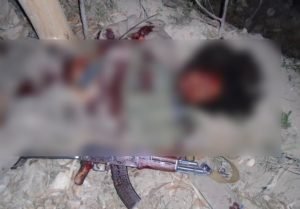 At least three Taliban militants were blown up by own explosives in eastern Laghman province of Afghanistan, the Afghan Military said.

According to 201st Silab Corps of the Afghan Military in the East, three Taliban militants were killed while planting an improvised explosive device in Gardi Salaw area of Alisheng district.

The source further added that the militants were killed after the improvised explosive device went off prematurely.