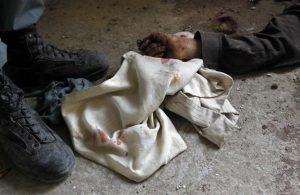 A local leader of the Taliban group identified as Mazlum was killed along with his 30 fighters during operations in southern Helmand province.

The Ministry of Defense (MoD) said the operation was launched in cooperation with the Afghan Air Force and artillery units of the Afghan army.

According to a statement by MoD, the operations were conducted in Sangin and Marjah district, leaving 30 militants dead and 11 others wounded.

The statement further added that 15 militants were killed and 2 others were wounded during a separate operation in Haji Aryub area of Paktia province.

According to MoD, at least 4 soldiers of the Afghan National Army (ANA) also lost their lives during the operations.