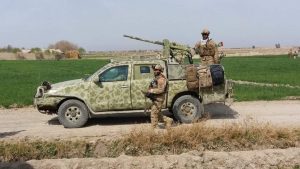 Mehri further added that the attacks were launched late on Sunday night and as a result at least fifteen security personnel have lost their lives.

He said at least five security forces were martyred after the Taliban militants attacked their security posts in Posht Rod district.

At least five Taliban militants were also killed during the clashes with the security forces, the provincial governor’s spokesman added.

In the meantime, a member of the provincial council says at least 17 security personnel have lost their lives during the clashes.