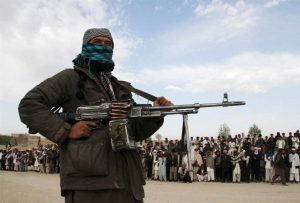 The Taliban militants have launched a coordinated attack on Moqor district in southeastern Ghazni province of Afghanistan on the first day of the cesaefire announced by the Afghan government.

Provincial governor’s spokesman Arif Noori confirmed that the militants launched a coordinated attack on Moqor districts in the early hours of Tuesday morning.

In the meantime, a security official said the militants have detonated a Humvee armored personnel carrier packed with the explosives near the district security commandment compound.

The source further added that the attack has left at least 5 policemen dead while more than 10 Taliban insurgents were also killed during the clashes.

According to the official, the clashes between the two sides still continue in the vicinity of the district.

This comes as President Mohammad Ashraf Ghani on Thursday announced that the government has decided to a ceasefire with the Taliban group starting from 27th of the holy month of Ramadan until 5th day of Eid.