Taliban: Jihad waged for development of country, Afghans should not flee to Europe 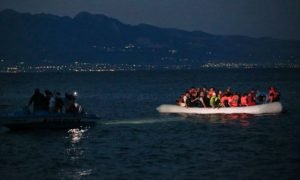 With dramatic surge in the number of Afghans leaving the country with majority heading towards European countries amid growing violence, the Taliban militants group in Afghanistan has issued an unusual statement urging the Afghans to remain the in the country, insisting that they wage jihad for the development of the country.

The statement by the Taliban group was released on Sunday and days after reports emerged that some of the Afghan migrants are purchasing threat letters forged by certain individuals who are charging considerable amounts in the black market to issue the letters in a bid to help the migrants easily go through the asylum process.

“While the Islamic Emirate sees the corrupt Kabul regime as the main driver behind the mass migration of our countrymen, it calls on all its countrymen fleeing the lap of their motherland towards the uncertainties of drowning in dark seas and being killed or held prisoners in foreign lands to choose the path of patience and perseverance by enduring the little hardships inside their country instead of illegal migration and defaming the Islamic Emirate by presenting fake threat letters,” the statement reads.

Despite the group is blamed for majority of casualties incurred to the civilians, however, Taliban said “The Islamic Emirate is waging Jihad so that the country is developed and our countrymen provided with a prosperous secure life under the shade of an Islamic system. Hence no one should be fooled by the propaganda against the Taliban and Mujahideen. The Islamic Emirate has done and will continue to do everything possible to aid and provide serenity to our countrymen.”

There has been a steep rise in the number of Afghan asylum seekers heading towards Europe during the recent months amid deteriorating security and economic situation in Afghanistan.

According to reports, over 146,000 Afghans have reportedly left the country during the current year, mainly due to deteriorating security situation with majority of them departing towards European countries, particularly Germany.

The migrants are facing numerous miseries by illegally travelling through the risky route which is mainly through Iran and Turkey where numerous incidents resulting to casualties have been reported.

An Afghan journalist couple lost their 4-month-old baby after their Europe-bound boat capsized in Turkish beach.