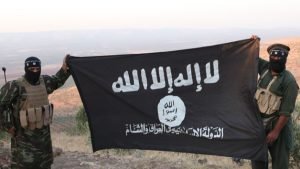 NBC NEWS, a US based media organization says to have talked to some insurgent commanders in Afghanistan and Pakistan who have confirmed that hundreds of Taliban have diverted to Islamic States in Iraq and the Levant (ISIS) or DAESH.

NBC NEWS claims to have talked to four insurgent commanders in Afghanistan who have said that a number of Taliban fighters have joined DAESH and more are talking about it.

“A small number of people of the Afghan Taliban who weren’t happy with their leadership joined Daesh, but others are discussing meeting and waiting for a suitable time to become part of it,” NBC NEWS quotes a Taliban commander in eastern Nangarhar province of Afghanistan who has spoke to them on condition of anonymity.

“Our people are now getting frustrated and asking us why did we fail in getting a space in Afghanistan to implement Shariah, despite the loss of thousands of people in their war against the U.S. and its allies,”, the unnamed Taliban commander was quoted as saying.

NBC NEWS further quotes the Taliban commander as saying “Their concerns are genuine as we don’t have an inch of land in our possession in Afghanistan where we could live freely.”

Afghan Taliban leadership has not accepted that their fighters have diverted to ISIS but has ordered fighters not to let ISIS operate in Afghanistan.

NBC NEWS also claims to have talked to some insurgent commanders in Pakistan who have confirmed that hundreds of Tehreek-e-Taliban Pakistan (TTP) fighters are now part of DAESH’s new branch in Pakistan.

NBC NEWS quotes a Mufti Hassan Swati, who according to NBC NEWS was TTP commander for Peshawar, now claims to be the deputy of ISIS in Pakistan, as saying “Hundreds of militants quit their groups and joined us [after it started]. Initially we had some problems of resources in running the organization but we have enough resources now.”

Swati has told NBC NEWS that the new branch of ISIS is being led by Hafiz Saeed Khan and its headquarters is in Baloochistan state of Pakistan.

ISIS releasing a video recently claimed to have established Khorasaan, previous name of Afghanistan which also included parts of Pakistan, Iran and other neighboring countries.

Although Pakistan has not publically accepted that ISIS has started operation in its territory but a video emerged last month showing a number of EX-TTP commanders claiming to have joined ISIS and currently operating in Pakistan under the command of ISIS.

In the video a man with a long knife in his hands was seen beheading a person who he claimed was a Pakistani soldier captured during fighting.