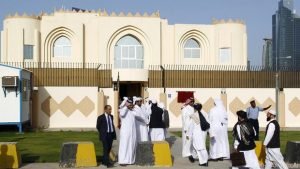 According to reports, a delegation of of Taliban officials have recently visited China to meet with the Chinese officials and discuss issues related to Afghanistan.

Sources privy of the development have told the Afghan Islamic Press that the delegation was led by Qari Din Mohammad who is a member of the Taliban political office in Doha.

No further details were given regarding the outcome of the visit, however a Taliban official has said that the purpose of the visit was share the Islamic Emirate’s stance with China.

The delegation reportedly visited China late in November last year when Beijing had put forward a proposal for a “peace and reconciliation forum” in a bid to help revive peace talks between the Afghan government and Taliban militants group.

The peace plan proposed by China would gather representatives from Afghanistan, Pakistan, China and the Taliban command.

The Afghan officials have not formally commented regarding Beijing’s proposal but reports suggest that the plan was discussed at a meeting of nations taking part in the “Istanbul Process”.

Efforts to revive peace talks between the Afghan government and Taliban group comes as US-led combat troops formally ended their combat mission after 13 years of war.

China is concerned that the withdrawal of bulk of the NATO troops will leave a security vacuum which would further help the Uighur militants to step up their fight as they seek a separate state in western China’s Xinjiang region.