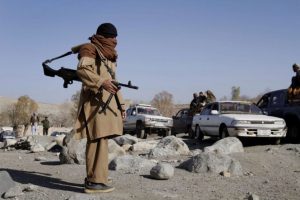 At least 54 militants including a local commander of the Taliban group was killed during the clearance operations in southern Helmand province.

The Ministry of Defense (MoD) said the militants were killed during the joint clearance and counter-terrorism operations in the past 24 hours.

According to a statement by MoD, all the militants, including the local commander of the group, Hekmatullah, were killed in Garamser district.

The statement further added that the operations were conducted with the support of the artillery units of the Afghan army and the Afghan Air Force.

In a separate operation in southern Kandahar province, the Afghan forces arrested a drugs smuggler and confiscated 150kg of opium, 2 sacks of Hashish, and 2 motorcycles, MoD said, adding that the drugs were set on fire by the security forces.

No further details were given regarding the possible casualties of the Afghan security forces during the operations.

Helmand is among the relatively volatile provinces in southern Afghanistan which witnessed growing violence as a result of the Taliban-led insurgency in the past one week.