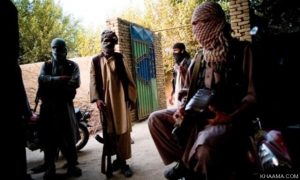 At least three Taliban militants, including their commander were killed following a gun battle in northern Faryab province on Sunday.

According to local security officials, the Taliban commander was identified as Qari Hamidullah who was also well known as commander Jundullah.

Provincial police spokesman Syed Massoud Yaqoobi said commander Jundullah was killed along with two other militants while they were trying to attack a police check post in Khawajah Sabz Posh district.

Faryab is among the volatile provinces in northern Afghanistan where anti-government armed militants are actively operating in a number of its districts.