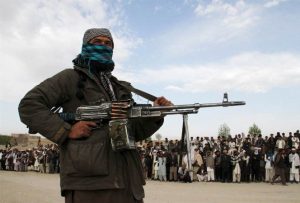 The Taliban insurgents have brutally murdered an elderly woman on charges of cooperating with the government and security institutions in southern Helmand province of Afghanistan.

According to the local government officials, the elderly woman who was around 85-year-old, was initially kidnapped and was later murdered in a brutal way in Garamsir district.

The provincial governor’s spokesman Omar Zwak confirmed the incident and said the woman was murdered by the Taliban insurgents few days ago.

He told BBC’s Afghanistan service that the militants initially chopped off the limbs of the elderly woman before murdering her on charges of cooperating and supporting the government.

Helmand remains one of the most volatile provinces in southern Afghanistan since the fall of the Taliban regime in 2001 where terrorist related incidents are frequently reported from its various districts.

The execution of civilians by the Taliban insurgents on charges of working or cooperating with the government is not a rare incident.

However, this is the first time the militants of the group have killed an elderly woman on charges of supporting the government.