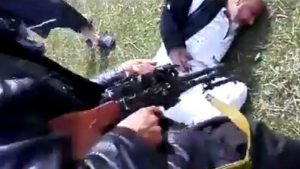 A distressing video has emerged from the northwestern Badghis province of Afghanistan which purportedly shows horrific torture of a tribal elder by the Taliban militants before he is executed.

Local police officials have confirmed that the tribal elder Haji Allah Dad was recently captured by the Taliban militants after he visited the Taliban-controlled area.

Saberi told BBC that the perpetrators involved in the brutal torture and murder of the tribal elder have been identified and efforts have been put in place to detain them.

He admitted that the arrest of the perpetrators would be difficult as Taliban militants are having major influence in Qads area where the tribal elder was tortured and killed.

The video was widely shared online on social media websites which purportedly shows humiliation of the elder besides he was brutally tortured.

The Taliban militants group has not commented regarding the execution of the tribal so far.