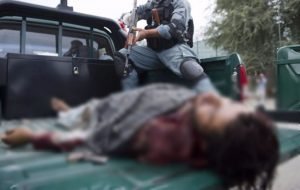 A Taliban attack was repulsed by the Afghan security forces in Farah province located in western part of the country, the Ministry of Interior (MoI) said Tuesday.

According to a statement by MoI, a group of Taliban insurgents launched coordinated attack on a police check post in the village of Karez located in the center of Farah.

The statement further added that the attack was launched on Monday evening but the Afghan forces efficiently responded to the Taliban fire.

At least 10 Taliban insurgents were killed and 7 others were wounded after the attack was repulsed, MoI said.

MoI also added that a vehicle, a motorcycle and some weapons and ammunitio belonging to the Taliban militnts were also confiscated.

The Afghan National Police (ANP) forces did not suffer any casualties during the gun battle, MoI added.

The anti-government armed militant groups including the Taliban insurgents have not commented regarding the incident so far.

Farah is located in the west of Afghanistan which is a relatively peaceful province but the anti-government armed militant groups are active in a number of its remote districts.

The militants are often conducting insurgency activities which comes amid rampant Taliban-led insurgency across the country as the group is busy conducting attacks as part of its spring offensive.