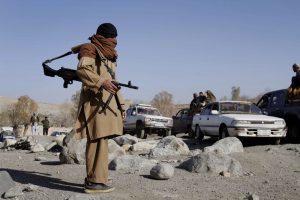 A coordinated attack by the Taliban insurgents was repulsed by the Afghan security forces in eastern Nangarhar province.

The provincial police commandment in a statement said the attack was launched late on Sunday night targeting the coordination center of the Afghan security forces in Bati Kot district.

The statement further added that the attack was successfully repulsed and a Taliban insurgent was killed during the clash.

According to the statement, the Taliban insurgent killed during the clash has been identified as Qari Naseeb who is hailing from the ssame area.

Nangarhar is among the relatively calm provinces in eastern Afghanistan but the anti-government armed militant groups are active in some of its remote districts.

Both the Taliban insurgents and militants affiliated with the Islamic State of Iraq and Syria (ISIS) terrorist group are operating in this province.

Bati Kot is among the remote districts where both the Taliban insurgents and ISIS loyalists are actively operating and often clash among each other besides conducting insurgency against the government.