Taliban are main reason behind US forces presence in Afghanistan: Hekmatyar 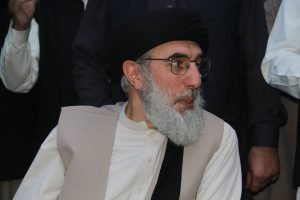 The leader of Hezb-e-Islami Gulbuddin Hekmatyar once again slammed the Taliban group for leading a baseless insurgency, claiming that the group is the main reason behind the presence of the US forces in Afghanistan.

Speaking during a gathering in eastern Nangarhar province in the presence of Second Vice President and other high level officials, Hekmatyar said the insurgency led by the Taliban has forced the American force to remain in the country, specifically pointing towards the attack on Kunduz city nearly two years ago.

Hekmatyar further added that the major attack on Kunduz city was a major mistake done by the Taliban insurgents for launching the attack after the US forces had started withdrawal from the country.

He said Hezb-e-Islami joined peace process since the US had taken most of its forces out of the country but the growing insurgency led to revision of decision by US to keep troops in the country.

The Hezb-e-Islami leader called on Taliban group to get united with the Afghan people and build the country.

Hekmatyar arrived in eastern Laghman province of Afghanistan on Wednesday and appeared in a gathering in front of media on Saturday, months after a peace deal was concluded between Hezb-e-Islami and the Afghan government.