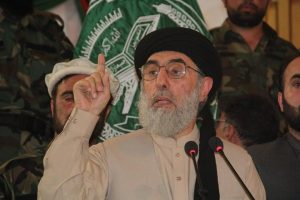 The leader of Hezb-e-Islami Gulbuddin Hekmatyar says Taliban are brothers despite the party is related to Taliban, Al-Qaeda, ISIS or any other group.

Hekmatyar made the remarks during his speech in capital Kabul and in the presence of the of the former Jihadi leader leaders including Abdul Rab Rasool Sayyaf and the current government leaders including the chief executive Abdullah Abdulla.

Hekmatyar further added that the coalition governments are failed in everywhere, insisting that the current is not suitable in the situation of Afghanistan.

The leader of Hezb-e-Islami once again insisted that the power can not be achieved through the use of power as the Afghan nation will never accept the use of power so that one can govern on them.

Hekmatyar arrived in eastern Laghman province over a week ago and since then he has travelled to eastern Nangarhar province.

The Afghan officials are optimistic that the signing and implementation of peace agreement with Hezb-e-Islami may help to encourage other insurgent and militant groups to join reconciliation process and end the war through negotiations.

Former Afghan President Hamid Karzai speaks during an interview to the Associated Press in Kabul, Afghanistan,...

According to Taliban security sources in Ghazni province, an unexploded ordnance, mortar shell,...