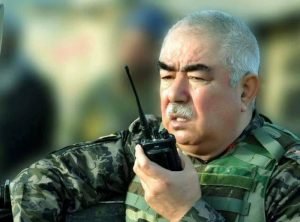 The Taliban militants ambushed the convoy of First Vice President General Abdul Rashid Dostum in northern Faryab province as he is leading a counter-terrorism operation against the group in north.

The incident took place on Sunday as Gen. Dostum was on his way towards Ghormach district accompanied by a convoy of the security forces.

Gen. Dostum confirmed the attack and said the militants were in police uniform and ambushed the convoy of the security forces.

Gen. Dostum arrived in Faryab province last week after the Taliban militants launched a coordinated attack on Ghormach district and seized its control from the security forces.

The Taliban militants have intensified attacks on key northern provinces during the recent months as the group attempts to expand its insurgency activities in northern parts of the country.

The Taliban militants launched a coordinated attack on the strategic Kunduz city last week and managed to infiltrate into some parts of the city, including the central Kunduz city square.

In the meantime, Gen. Dostum said the Islamic State of Iraq and Syria (ISIS) terrorist group plans to deploy at least 7,000 fighters in northern parts of the country.

The First Vice President further added that the Taliban group should be initially defeated in the norther parts of the country in a bid to pave the way for the establishment of strong posts for the security forces to fight the ISIS loyalists.